It is estimated that on Valentine's Day on Earth, a whole billion people will receive a nice note or little something. That is why we have prepared a special "love" edition of decorated Fish knife for you, which can also be such a surprising and original gift. By the way, do you know what is behind the Valentine's Day? 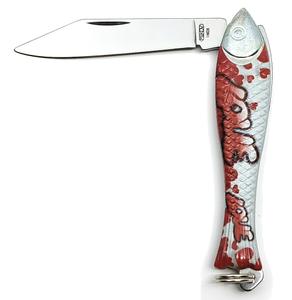 Rather than a real character, Valentine's Day is a legend, but that doesn't make the story less attractive. Legend has it that the Roman emperor once forbade young men to marry. The reason was utterly prosaic. None of them wanted to fight in the army after the wedding. But Rome needed a strong military.

Despite the imperial ban, the young and handsome bishop Valentine still kept the young people married. Secretly, of course. And, of course, it came up. In ancient Rome, people loved gossip and gossip, nothing was hidden. In this, Rome was very similar to our present.

Bishop Valentine ended up in prison and was sentenced to death. In prison, however, he eventually fell in love with the prisoner's beautiful daughter. And on the eve of his execution, he sent her a note with his declaration of love.