Representatives of Mikov met on Monday, 12 September, at the Community Centre for War Veterans in Prague with members of the UNPROFOR mission who were direct participants in the shelling of the Tango 23 Repetitor observation post, some of them wounded, during which two Czech soldiers - Sergeant Petr Valeš and Staff Sergeant Luděk Zeman - were killed. 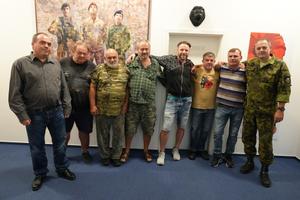 "It was an incredible experience for me to hear with my own ears the story of what happened that day. And it only confirmed the correctness of the recommendation of the former Chief of the General Staff Aleš Opata to name the knife, the proceeds of which go partly to the Military Solidarity Fund, by this name - Repetitor," said Martin David, Mikov's commercial director.

The social afternoon was also attended by Major Roman Hippík, the author of the Repetitor knife design and the soul of the War Veteran project. The project serves to systematically support the Military Solidarity Fund from a share of the proceeds of a series of knives inspired by foreign missions of the Czech Army.

"I was very pleased that the whole meeting gradually became a working meeting, where great suggestions were made on how we could together help war veterans even more. We took away many suggestions that we will think about intensively with the veterans and I believe that we will be able to implement many of them as soon as possible. Of course, we will keep you informed about further activities," added Martin David.

Mikov launched the War Veteran project in 2019. So far, 3 knives have been launched, the limited edition M-1917, Storm and Repetitor knives, thanks to which the Military Solidarity Fund has already raised 350 thousand crowns.