Looking back at the Knife Festival

It has been ten years since the first Knife Festival took place in Mikulášovice on May 12, 2012. Since then, they have not been held regularly every year, the longest break was brought by the recent coronavirus epidemic, and so this year, on August 6, only the 7th edition took place. What was it like? 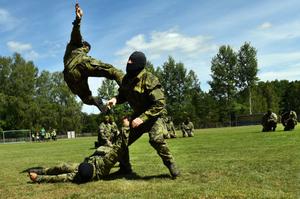 The venue was new. In conjunction with the 90th anniversary of the Mikulášovice swimming pool, the festivities were moved from the Mikov yard and the town centre to the sports complex. Thanks to this, they could offer a lot of new things, although the connection with Mikov remained, of course...

However, what did not change, or rather strengthened, was the support of the town, headed by the mayor Miluše Trojanová, and the Mikov company and its director Karel Ježek. And it was not only financial and organizational support, but also the sponsorship of the event with their names, thanks to which important personalities were invited to Mikulášovice. But all this would not have been enough for success if dozens of other enthusiasts, led by the soul of the festivities, Petr Procházka, had not been involved in the preparations.

The Knife Festival is a great celebration that Mikulášovice still has a quality cutlery craft and that it can be one of the world's leading towns in this field. This is not a matter of course, because in many European cities this production has already disappeared under the pressure of globalisation and in Mikulášovice it continues only thanks to the commitment of the Mikov company, which has managed not only to stay on the domestic market with the quality of its production, but also to penetrate abroad. Knives Predator, UTON, Pocket and of course Rybička are proven names on the knife market.

That is why the focus of the Knife Festival was, of course, mainly on knives. The already traditional participation of the Czech Army with excellent demonstrations of knife fighting man to man could of course not be missing this year either. However, there was also a demonstration of combat techniques by military chemists from Liberec and an army recruitment stand.

And thanks to the festivities, Mikulášovice could welcome the second general visit in the last two years. While last year, on the occasion of the awarding of badges of honour to the management of Mikov, the Chief of the General Staff Aleš Opata visited the production, this year the festivities were visited by the first Czech general Lenka Šmerdová, who is responsible for the care of war veterans within the army. Mikov is involved in this field through the War Veteran project, where he contributes to the Military Solidarity Fund from the proceeds of sales of the Storm and Repetitor knives.

In addition to the army, of course, there were also demonstrations of historical fencing by the Alotrium group, Lubomír Žižka, a multiple European champion in knife throwing, and Ondřej Klymčiw, a racer, shared his experience from the Paris-Dakar Rally. Local Mikulášovice associations also had their stands. Interesting shows were presented by professional divers and the volunteer fire brigade, which presented in practice at a training intervention the new rescue knife Mikova - Rescue.

The absolute novelty of the festivities was a pair of football matches. First, the girls' football club Sparta B played against the A team of FK MIkulášovice (who won 3:1 against the girls) and then the old guard of Mikulášovice fought a fierce battle with the selection of international Jan Berger. Here the result was exactly the opposite, Mikulášovice lost 1:3. It was not surprising, because next to Jan Berger they were facing real legends like Ladislav Vízek, Tomáš Řepka or Lubomír Mistr.

But these football matches were not just some time filler, because they were directly related to knives, specifically to the new collector's edition of Mikov knives called Football Legends. Currently, three knives from this edition are already on the market - Lubomir Mister, Jan Berger and Jan Koller, who had his christening during the match of the stars. The entire edition was available for purchase at Mikov's sales stand. And whoever was not interested, chose from a wide range of the whole assortment.

As usual, the Knifemakers' Festival went on into the night with a rich cultural programme. And when over a thousand visitors went home in the evening, everyone was already looking forward to what the next edition would bring. They will have a lot to surpass, because this year's edition set the bar very high not only with a record turnout, but also with the number of enthusiastic reactions from visitors and performers. So see you again on the first weekend of August 2023.